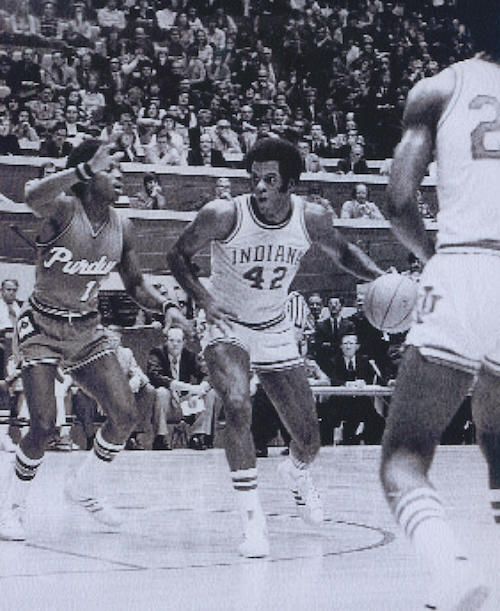 Scott May graduated from Sandusky High School in 1972. He was an All Ohio player in 1971 and 1972. Scott was also a high school All-American in 1972. He averaged 25 points per game as a senior. In Scott’s senior year at Indiana and in his 26th game he broke his arm and played sparingly in their last four games. He had scored in double figure in every game until his injury and his average dropped from 19.2 to 16.3, His high game was 29 points against Kansas where he hit Indiana’s first nine points in overtime in a 74-70 victory. He earned All-American Honors at Indiana University (in AP, UPI and Helms Foundation polls) under Bob Knight in 1975 and 1976. May was the MVP of the All Big Ten team in 1976. Scott often guarded the opponent’s best player and was an exceptional shooter against zone defenses. May was a very good passer and unselfish in addition to his scoring ability. He was co-captain of the team with Quinn Buckner as a senior. Scott had the distinction of being on the Gold Medal winning Olympic team in 1978 for the USA. Scott played professionally for five years with the Chicago Bulls and two years with Milwaukee and Detroit. During his pro career he scored 3,690 points averaging 10.4 points per game. Scott played in 355 professional games and 7 playoff games. He had 1,450 rebounds, shot 46.2% from the field and 81.1 % from the free throw line.