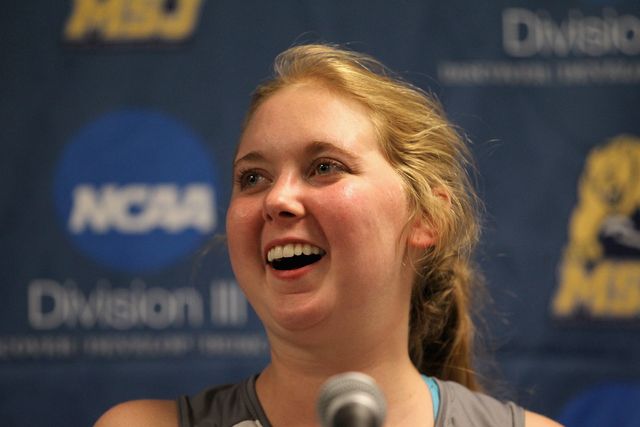 Lauren Hill of Greendale, Indiana, drew the admiration of people all over the United States in 2014 when she was a freshman at Mount St. Joseph's University.

That's when she made a courageous appearance in a basketball game that triggered a strong fund-raising campaign for victims of Diffuse Intrinsic Pontine Glioma (DPIG), a rare and fatal pediatric brain tumor.

Although she had an inoperable tumor that limited her activity, she was determined to play in Mount St. Joseph's season-opener against Hiram College.

The game was moved forward from November 15 to November 2 because of her declining health and was relocated to Xavier University's Cintas Center because it outgrew MSJ's campus facility. It drew 10,250 spectators and was nationally televised.

Not only did Hill score the first and last baskets of that game, but she appeared in games against Bethany, Franklin and Wooster and made a layup in each of them before ending her playing career.

The fund-raising campaign following the Mount St. Joseph-Hiram game raised $1.5 million by the time the 19-year-old Hill died five months later. To date, $2.4 million dollars has been raised in Lauren's honor. Lauren has inspired a nation with her story and is a beacon in the DPIG community still today.