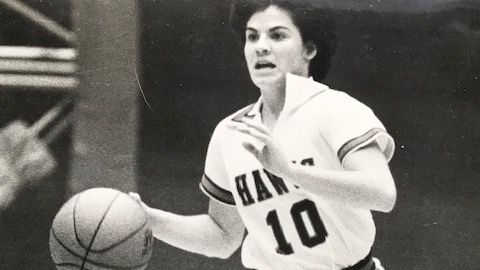 On the court, Toni Roesch always put forth an admirable level of tenacity and heart, and her love and knowledge of the game are still on display today.

A Columbus native, Roesch quickly became a local legend as a mighty mite point guard for Bishop Hartley High School and in the years that followed at Ohio State. In fact, she started as a freshman during the 1978-79 season and immediately was instrumental in getting Hartley all the way to the state championship game. She also guided the Hawks to the regionals as a sophomore, the state semifinals as a junior (while achieving first-team all-state status) and back to the regional tournament as a senior.

Roesch couldn’t quite reach a state championship as a prep player but her effort can never be questioned, especially considering she played her entire senior season with a torn ACL suffered in the summer of 1981. She repeated as District Player of the Year as a senior and ended her amazing high school career with more than 1,600 points – 14.3 per game – and she set the school single-game scoring mark with a 36-point outburst. Plus, Roesch did return her alma mater to the state tourney during a long and successful run as a coach.

First, though, was Roesch’s outstanding four years at Ohio State, where she helped the Buckeyes capture four consecutive Big Ten titles and served as team captain as a senior. She also was named second-team All-Big Ten that season and claimed the Dr. Brown Leadership Award. Roesch coached for one season at Stetson University then returned to OSU to serve as a graduate assistant coach for two years, again helping the Buckeyes to win two more league titles.

Roesch served as head women’s basketball coach at Marietta College for a couple years but in 1993 returned to her roots as head coach of the Hartley girls team and an on-air analyst of Ohio State women’s basketball. In her five seasons as Hartley head coach, she was named District Coach of the Year twice and led the Hawks to three district titles.

In 1998, Roesch left the coaching profession but didn’t stray too far as she continued to mentor young players. She became owner of Ohio Sports Plus, a basketball training facility for boys and girls of all ages. In recent years, she also has helped bring light to the women’s game as a color analyst for Big Ten, MAAC, Ohio Valley Conference and Mid-American Conference contests as well as the WNBA as a broadcaster for ESPN, Comcast and FOX.